Do you know the old expression – sow the seeds and reap the rewards?

Well, that’s how members of Bexley Mencap’s gardening group feel right now. Because during the winter and early spring they spent every Friday helping in historic Hall Place’s Herb & Wildlife Garden. No task was too small, as the six man team dug up weeds, swept away leaves, tidied up the borders, removed rubbish and then finally planted an array of herbs and flowers.

The seven Mencap members, Matt, Emanuele, Liam, Matthew, Rob, Lee and Duncan took part in the three month gardening project with North West Kent Countryside Partnership. As you can imagine, sometimes over the winter the weather was pretty cold and the group often worked in the rain when the ground was damp and muddy. But the group kept on, mucking in and helping each other to lay the groundwork for the summer.

Here’s what the Project Manager Reece Evans of Partnership Officer of North West Kent Countryside Partnership had to say in February about our work:

‘It was lovely meeting you and working with such a great group of people, I will miss everyone so much and Fridays will be forever boring without everyone! On behalf of everyone here at Hall Place and North West Kent Countryside Partnership we would like to thank Bexley Mencap for your help at our herb and wildlife garden!’

Reece also said that all the members worked incredibly hard in the weekly sessions to help transform the garden.

‘We enjoyed ourselves so much. The garden is looking wonderful at the moment so all our hard work has definitely paid off.’

As well as being lovely to look at, the garden also attracts lots of birds and bees who, in turn pollenate the flowers. And that’s no accident. Mencap member, Duncan has an award winning allotment of his own so he knows a thing or two about gardening. In addition to having green fingers he’s also handy with his hands in another way. He makes bird boxes and bird tables out of recycled wood and has made bird boxes in another garden – the Old English Garden in Danson Park.

Team member, Liam also enjoyed himself on the project. ’It was good to stack up the bird boxes with twigs and branches and keep the bird feeder filled up,’ he said. ‘It was fun to rake up all the old leaves,’ adding the wheel barrow was in constant use at the time!

Matthew’s favourite task was planting the seeds. ‘They were so small.’ he said. And then watering them all afterwards. Although the spring rain helped with that! Once it was so cold and wet, he said, everyone had their hoods on and all the buttons done right up on their jackets, as well. Rob enjoyed digging up the weeds – not everybody’s favourite taks!

So how does the garden look right now? Well come and see it for yourself! It’s all rosy and everything seems to be blooming all at once. The various flowers are so tall and growing ever higher – larger than the flower beds!

Although Hall Place itself has been closed during lockdown, the gardens and grounds have remained open throughout. So, the Herb & Wildlife Garden has been a perfect place for people to stop and admire the lovely flowers and watch the birds and bees and other wildlife during their daily exercise. 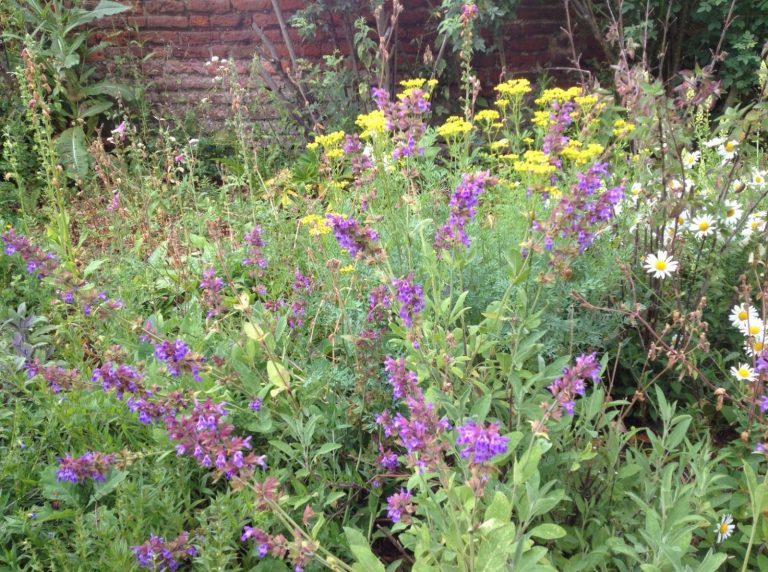